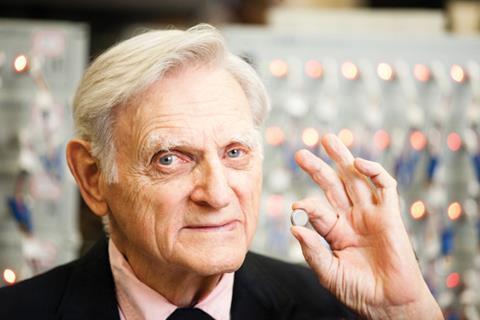 Professor John Goodenough from the Cockrell School of Engineering at The University of Texas at Austin has been awarded the Royal Society’s Copley Medal, the world’s oldest scientific prize. Already a fellow of the Royal Society, Goodenough is being honoured for his exceptional contributions to materials science, including his discoveries that led to the invention of the rechargeable lithium battery—used in devices like laptops and smartphones worldwide.

As the latest recipient of the Royal Society’s premier award, Professor Goodenough joins an elite group of men and women, such as Benjamin Franklin, Charles Darwin, Louis Pasteur, Albert Einstein and Dorothy Hodgkin, who have been awarded the Copley Medal for their exceptional contributions to science and engineering in the past.

The Copley Medal was first awarded by the Royal Society in 1731, 170 years before the first Nobel Prize. It is awarded for outstanding achievements in scientific research. In recent years, recipients include eminent scientists such as Peter Higgs, the physicist who hypothesised the existence of the Higgs Boson, as well as DNA fingerprinting pioneer Alec Jeffreys, and Andre Geim, who discovered graphene. Last year’s winner, Professor Jeffrey Gordon, was honoured for his contributions to understanding the role of gut microbial communities to human health and disease.